“WHY NOT?” was Sue Ramirez‘ quick quip when she was asked on the set of “Kid Alpha 1” if her leading man, newbie Javi Benitez would fall for her and show interest that he likes her.

We can sense the sexual tension between Sue and Javi when the questions center on the intimate scenes they shared in the film.

“I was hesitant nung una kung kakayanin ko ba siyang gawin. In the movie, I am a veterinarian na crush ni Javi. Pero in an encounter, ako ‘yung magliligtas sa kanya from people who wants to get him.”

Javi’s role is that of a guy, Guerrero on top of his class. Who later on becomes a killing machine as his intelligence is abrupted by a bullet that gets stuck to his brain. Thus, his focus and attention are geared in weapons, armory, fighting with his Savant Syndrome.

Direk Somes’ scenes can be described as very challenging for all his stars.

We witnessed a scene on our second visit to their Tanay ECO PARC set. Bustling with action with the running, gun battle and more.

Javi is set to make it and be known as an action star. 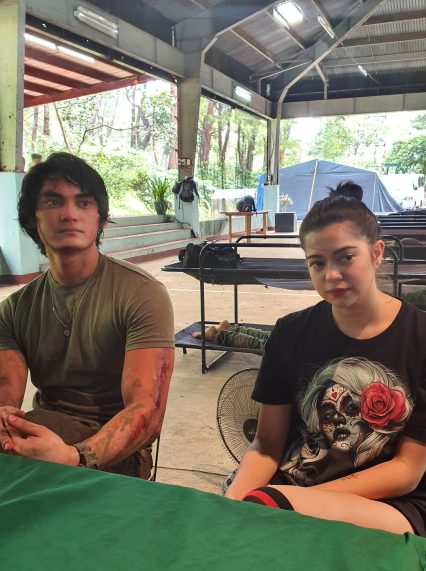 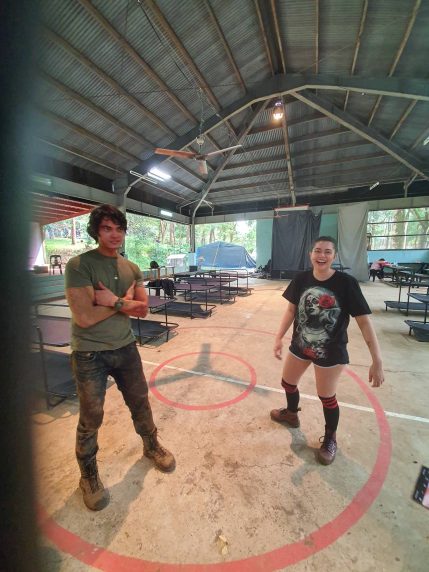 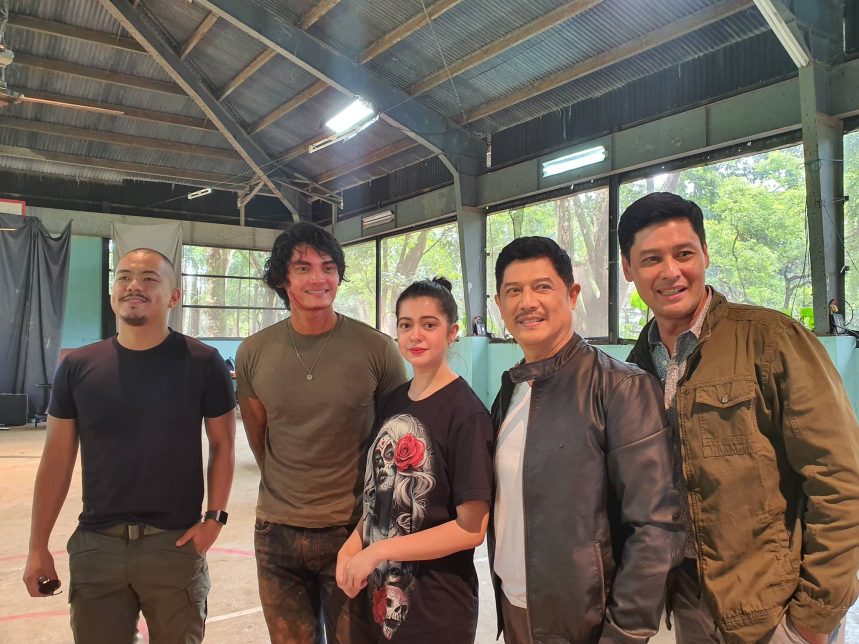 Was the process harder than he imagined?

“I grew up very athletic. I played foot ball kaya sanay ako na gumugulong sa putikan. But apart from that, I made sure that I will also learn the other stuff that action is all about. Kaya when I was required to do the fight scenes here, how to handle guns and knives and do the routines ready naman ako. Apart from what I already know and practicing na-nag-enroll na rin ako sa first ever action workshop in ABS-CBN. Naka-5 days na ako. All physical. And I’m loving it.”

A flushed face keeps on lightening up whenever Sue’s around.

“I am just thankful and blessed that we are the ones here on this set. Picked for this project. She’s so cool to work with. Getting along. White Mocha Frappucino perks her day.

Who could be the culprit?

“I am!” says the comic and magician Jeff Tam who has a good role with Joross Gamboa in the project.

Quipped Joros who shares the comic-action scenes with Jeff who is the sidekick of Javi in the movie, “Parang kami ang nag-push kay Javi to be in the movies. Eh, nakita niyo na naman, kung may paglalagyan ba siya in the industry. Nakita namin ‘yung pagpupursige niya. Basta ang bilin lang ng Dad niya, when there are explosion scenes, kung kelangan na mag-double siya, do it and not risk his safety. Kaya mga minor cuts, dapa lang naman ang napapala niya in most of his scenes.”

It was Jeff who was rushed to the hospital twice when after running in a scene scaling a hill, he hyper-ventilated. 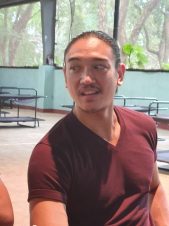 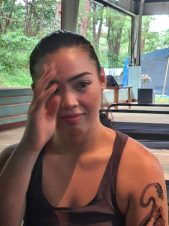 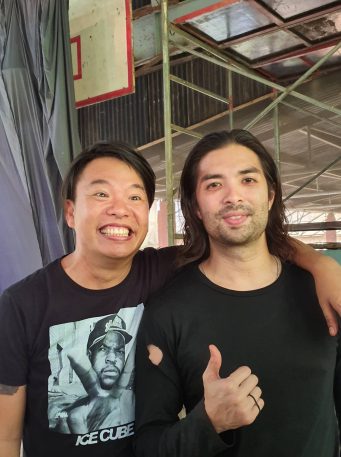 Joel Torre is not in the movie. But his Marella is! Know what, she is a certified boxer!

“I have fight scenes with Sue. Thanks to Ian (Taylor, stuntman and actor Levy Ignacio’s son) na natuturuan ako with the stunts we do. Na sabi nga niya parang dancing lang ang routine. As long as you have the right intentions.

“Pumapayag naman si Dad with the things I do. I used to be a competitive boxer. I find it a fun sport. It is a mental sport as well.”

“Hindi pa naman ako nakaganap in this kind of role. Pero nagtiwala sa akin si Direk. And they are all proud of what I have done in my action scenes. Magulo rin kasi ang takbo ng career ko. Am neither here nor there. But this time (am managed by tita June Rufino), with what has happened here, hindi ko ma bininigyan ng limit ang sarili ko. I had this one scene here lang na nahulog ako sa leeg ko. This time, I will make it a point a magka-tatak na ako for myself. Matagal na ako rito but, ‘yun nga wala pang naka-notice sa akin.”

She flew in that scene ala-The Matrix!

Veteran actors are doing their share, not just with action scenes but the drama and the complex characterizations assigned to them that will be revealed in the movie-Juan Rodrigo, Tonton Gutierrez and Christopher de Leon!

We were witnesses to some of the big scenes in the movie. And Direk Somes’ touch thrusts the scenes that would be jaw-dropping not just for the Filipino audience but be upped a higher notch as it competes in the international scene. 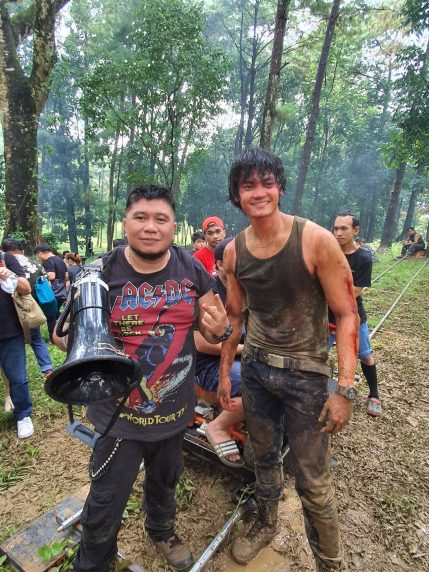 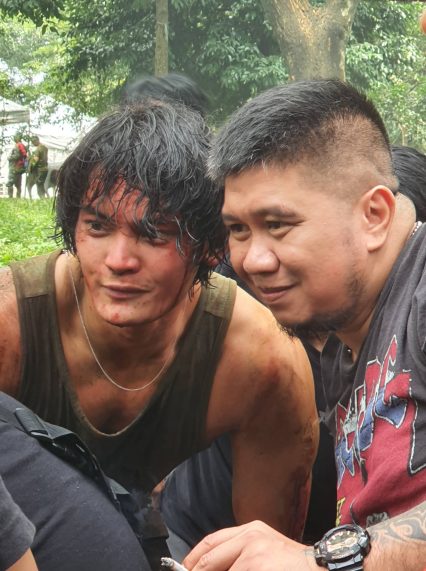 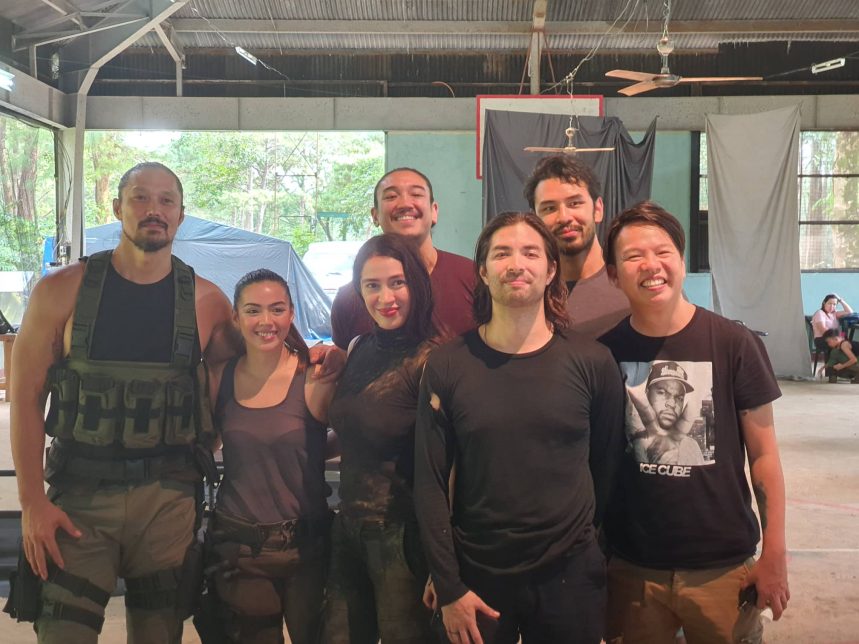 Javi when not dirtied is your boy-next-door man as those flexed muscles are revealed in glossy magazines and the ramp.

But when action scenes hover around him, we all agreed that he is the Tom Cruise of the Philippines!

Pia Alviola, the supervising producer is very proud of their project and thanks the following who keeps the stars on their toes with every scene they shoot.

“Our fight director is an MMA Champion-Erwin Tagle, the guns instructor is Marc Marcelino, Francis Pabalan (PNP) is the Grandmasters Champion of Guns in asia, Bojie is our knife instructor and the stunt director is Jappy Bahian and his team. Three more days with more big scenes are in store. Rain or shine, we are on our toes. The simple and little things are what we re always concerned about and on the look out. Ayaw namin may pumapalpak. As you have witnessed today.”

That was too long ago when I would visit scenes of action movies of our famous action stars. Today, we kinda relived those days when we walked in the muddy grass after the rain to sew and feel the energies of all involved in the shoot.

There was a big difference. And “Kid Alpha 1” will proudly share it with us on the big screen. Very soon!

And for Javi and Sue off cam?

We’ll wait if they will take it to the next level!