BE part in making history as the first-ever Filipino food and music festival in London, the Filipino Beats x Bites, happens at the “35th London Barrio Fiesta” on July 20 and 21 at the Apps Court Farm in Walton-on-Thames, Surrey near Hampton Court Palace.

Through the years, “London Barrio Fiesta” was organized by Philippine Centre in partnership with ABS-CBN Corporation, the largest and leading Filipino-owned media and entertainment company in the Philippines, through TFC, the flagship brand of ABS-CBN’s subsidiary ABS-CBN Global.

“London Barrio Fiesta” is the biggest two-day Summer festival in Europe, which showcases Filipino culture and talents through the various activities, booths, and performances.

But this year, with ABS-CBN celebrating its 65th anniversary and TFC now on its 25th anniversary, “London Barrio Fiesta” presents Filipino Beats x Bites where aside from introducing the Filipino culture and artists to the world, it also puts the spotlight on half Filipino artists who are making waves in the United Kingdom’s music scene. 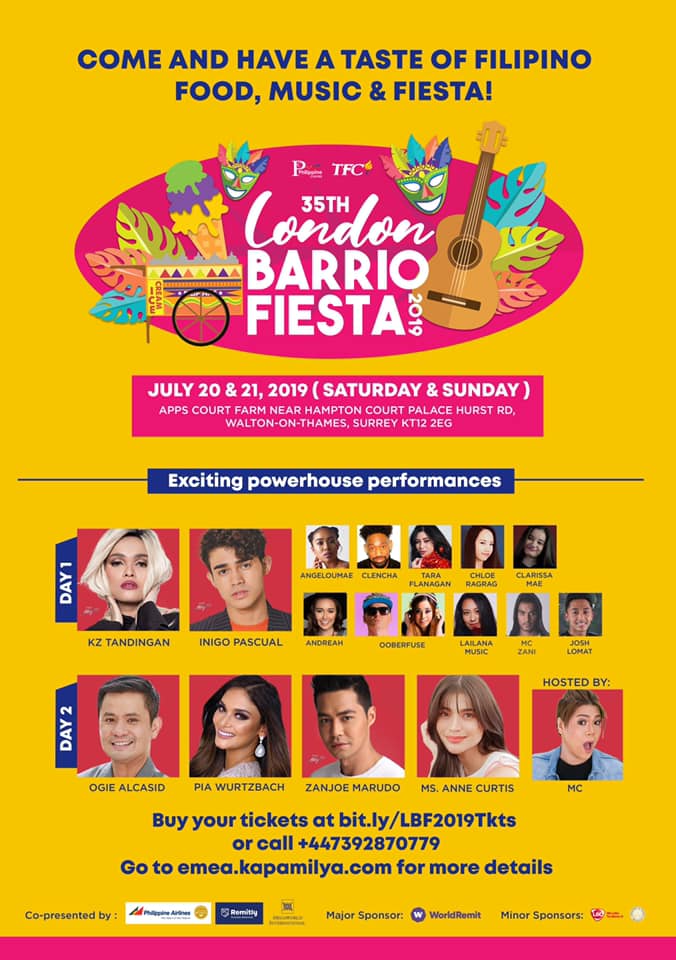 Performing on the first day of the event, July 20, are Filipino artists Inigo who recently launched his latest single “Options”, after his various engagements in the U.S. including the performance at the Viacom Headquarters in Times Square, Manhattan; and KZ Tandingan who was part of the Chinese singing competition “Singer 2018” together with British artist Jessie J, who she defeated in one of the episodes.

While for the second day, July 21, Filipino artists singer-songwriter Ogie Alcasid, heartthrob Zanjoe Marudo, Miss Universe 2015 Pia Wurtzbach, and singer-actress-host Anne Curtis will bring entertainment to everyone in the event.

Meantime, fill your hunger and cravings by munching on the food prepared by three of the most talked-about Filipino restos in London: Romulo Café, Barbecue Dreamz, and Mamason. Also, try something new and have a taste of some of the all-time favorite Filipino street foods at the Fili Bites booth.

A variety of activities also awaits eventgoers of all ages. Have your kids let go of their gadgets and play with their fellow children at the Palarong Pinoy area, where they get to experience the group games popular among the Filipinos. Spend quality time with them as well by trying the different activities at the Fun Fair.

Avail of the parking ticket for the parking at the Apps Court Farm may be bough as an add-on at £10 per day.

Meet new friends, learn something new, and experience the Filipino-style of festival at the “35th London Barrio Fiesta” on July 20 and 21 at the Apps Court Farm in Walton-on-Thames, Surrey near Hampton Court Palace.