FLORA is a circus elephant past her prime. She has a best friend, Dawn, daughter of the circus owner, Henry.

Though the circus has been doing well for years, the financial realities of running a circus in a poor region of Mexico has taken its toll.

When Henry tells Dawn that he intends to call the vet and euthanize Flora, she is appalled- and Flora has many good years left to live, and the idea of killing the elephant is one she can’t accept. While there is a preserve a few hundred kilometers away, the cost to house and feed Flora is too high for Henry and the circus to afford.

Determined to save her friend, Dawn sneaks away from circus clown Barnaby ans heads back to the circus, where she manages to stage an escape withering best friend. As the two head toward the preserve, Henry and the beautiful Isabella scramble to find her.

In the meantime, Flora and Dawn meet Sebastian, a local petty thief who they help out of a scrape, earning his friendship in the process. However, Sebastian holds a hidden motivation: he knows about the elephant’s fugitive status, and wants ton turn her in for a $500 reward. At the same time, two big game hunters, Bon and Runyon, are hired by a local mayor to take Flora out after convincing him thatcher’s a threat to run amok.

When Henry learns that two hunters are also after Flora, he’s horrified- he never wanted to kill the elephant in the first place , and now his daughter is in danger.

Sebastian’s secret comes to light, and he and Dawn fight over the breach of trust. After stealing a truck and making a run for it, the team makes it to the preserve , where a group of well-wishers wait: Isabella’s Instagram have made Flora a minor celebrity.

However before Flora can get into the preserve, Runyon appears with a rifle, ready to take her out. Henry shields her from Runyon’s shot, taking the bullet in the process.

Runyon is cuffed, and we learn that Flora has come to the right place: she’s been reunited with her daughter, who has made it to the preserve from the same same Zoo where her Mom was from.

On July 10, 2019, a heartwarming story in “Saving Flora” will make its way to the hearts of the Filipino audience.

WOMY Productions heads Geoffrey and Malou Marzan and Shirley Chen are very proud of the movie made by Synkronized, FJ amd SKD, written by David Moss and its director Mark Taylor. And produced by Fabio Golombek, Amber Wang and Brad Billington.

The elephant TAI is a member of the “Have Trunk, Will Travel”, a family of people that truly cares about the well being of elephants.

HTWT is privately funded with income generated by giving rides, doing shows, special events, movies and commercials being used to care for the elephants and provide for their future.

The health and welfare of the elephants is a major concern for any person wishing to work with elephants. Therefore, all HTWT handlers have served a rigorous apprenticeship. They learn proper handling and husbandry, including foot and skin care, transport and public safety. 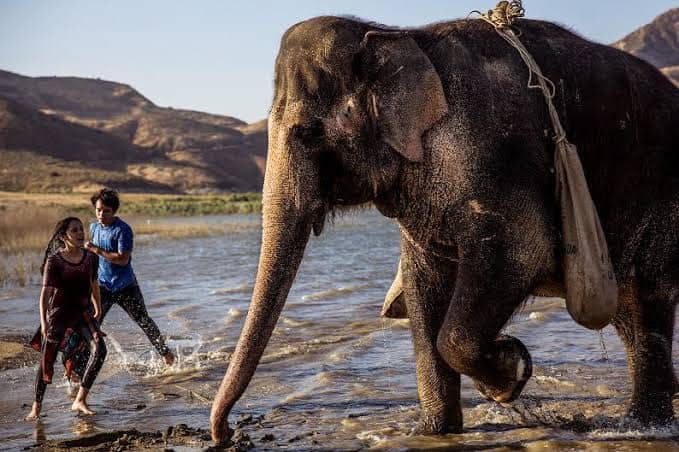 Each elephant has a distinctive personality and responds enthisiastically to a familiar face. While each handler is well-acquainted with every elephant, each has his or her own personal favorite, and develops a special relationship of trust amd respect. HTWT is very proud of these elephants.

The film has currently won over 4 awards including Best Actress – Jenna Ortega at the HongKong Film Festival and Best Debut Director Mark Taylor at the Twin Cities Festival.

We loved Flora’s scenes with Dawn and Sebastian. The photography was breath-taking.

How far would you go to save a friend is the movie’s central plot. A different kind of journey is shared in the movie’s intention in sharing the conflict rhe characters faced in that big top!

Fall in love! As lovebirds Dawn and Sebastian saves Flora!