MANILA, March 29, 2019 — In celebration of the release of its upcoming suspense thriller Pet Sematary, Paramount Pictures has collaborated with a Caloocan-based Filipino artist via Talenthouse (a leading online open-source creative platform), to create the film’s alternative poster for the Philippines.

The Pet Sematary tribute poster was done by Don Suratos, 39, a graduate from the University of the Philippines College of Fine Arts, and now working as a successful freelance illustrator. His illustration may be used for the film’s marketing campaign.

Suratos, 39, was specifically recruited by Paramount based on his impressive body of work in Talenthouse. “I used to join Talenthouse competitions, but I eventually got really busy with commissioned book illustrations, so I stopped joining,” Suratos shares. “Then, out of the blue, I received an email that I was personally selected by Paramount Pictures thru Talenthouse to create an artwork for them.”

The Malabon-born illustrator then set out his preparation by watching the trailers of the 2019 film, and Googling official production stills. His main goal was to “make the elements simple and highlight the girl looking back, the graveyard and the cat’s eyes as my main elements,” Suratos reveals.

The end result is an enthralling masterwork that elevates the film’s horror genre origins. Columbia Pictures, which distributes Pet Sematary in the Philippines, especially love the piece that for the first time, they are not only using Hollywood posters in their marketing campaign but also Suratos’ artwork.

Stephen King’s 1983 novel Pet Sematary has riveted generations of enthusiastic readers as a prime example of the writer’s gift for melding the everyday with the extraordinary to create supernatural thrillers that explore our darkest impulses. Poignant, petrifying and impossible to put down, the saga of the Creed family is a dark and terrifying parable about love and loss from one the most popular fiction writers in history.

Based on the seminal horror novel, Pet Sematary follows Dr. Louis Creed (Jason Clarke), who, after relocating with his wife Rachel (Amy Seimetz) and their two young children from Boston to rural Maine, discovers a mysterious burial ground hidden deep in the woods near the family’s new home. When tragedy strikes, Louis turns to his unusual neighbor, Jud Crandall (John Lithgow), setting off a perilous chain reaction that unleashes an unfathomable evil with horrific consequences.

Pet Sematary is directed by Kevin Kölsch and Dennis Widmyer (Starry Eyes) from a screenplay by Jeff Buhler (The Prodigy) screen story by Matt Greenberg based on the novel by Stephen King (It, The Shining). The film stars Jason Clarke (Dawn of the Planet of the Apes), Amy Seimetz (A Horrible Way to Die), Jeté Laurence (The Snowman), Hugo and Lucas Lavoie, and John Lithgow (Netflix’s The Crown). 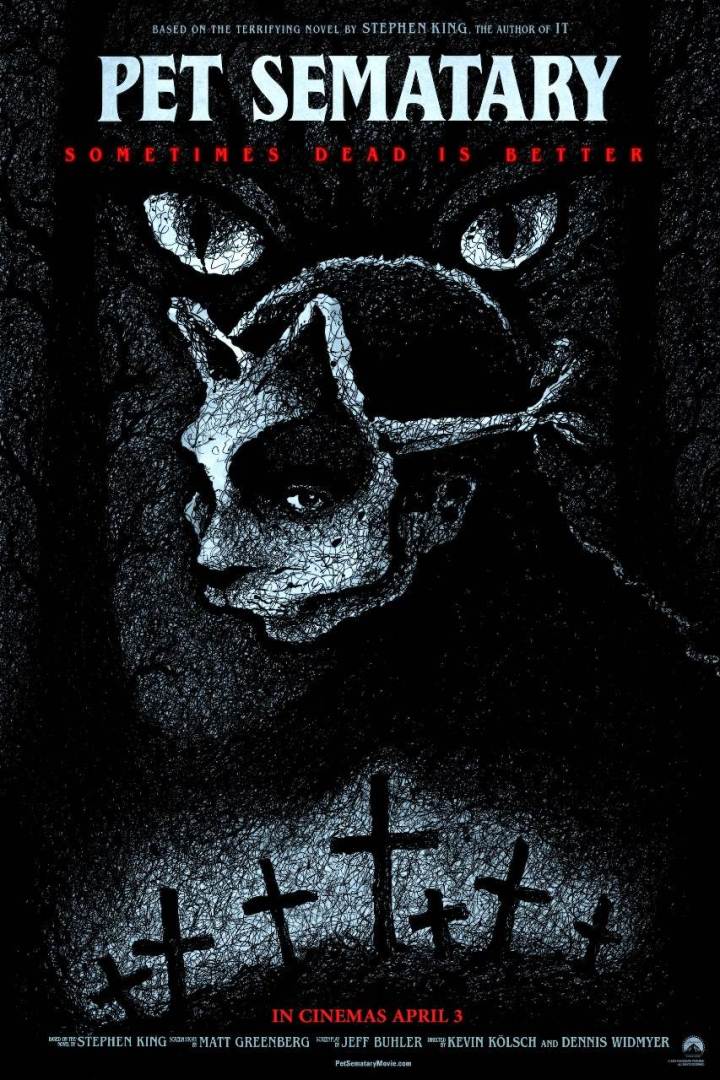